As usual, the work on WAID continues.  Just to get this out of the way, I’m finally pronouncing dead my goal of submitting late to Indiecade.   As much as it pains me to sit on my work as time goes by, I still just don’t feel comfortable sending out what I have.  Mainly, I wasn’t able to get as far in development as I was hoping.  I guess it didn’t help that I now know I won’t be in the country when Indiecade is going on, so any benefits that submitting a game confers for conference attenders are void.  And considering the scale of the game and my development schedule, by the time I actually get feedback from the jury I’ll probably be in the final stages of development, if not finished.  But I’m glad I at least set that goal, as it definitely helped push me along and sped things up!

I’ve got the characters and the tilesets — now I just have to fill out all the scenery/props for the game.  After animating all of the characters, I can’t adequately express how pleasing it is to create a sprite and be able to just move on, without having to create 25+ slightly different copies of it.  If it looks good, that’s it.   Next one.

It’s also a bit nice to return to some objects that I had done for the first game and put a slightly different spin on it.  With the simplistic style I’m using, it can only improve so much, but I’ll take any sign of progress!

I’ll stick to the pattern of showing my assets from the previous game and this upcoming one, side by side.  But I haven’t actually finished the scenery for WAID2 yet; what I have here is still less than half of what I plan to make.  However, it’s already more than the crap that I scribbled out last time around. 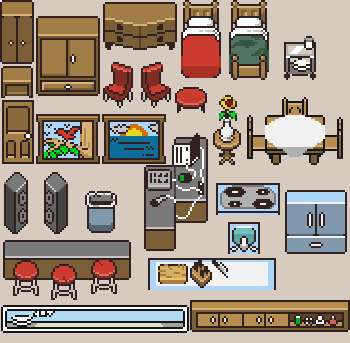 I’ve been working on some other art assets, but this is the only stuff fit for posting at the moment.

View all posts by Peltast