Hello world!  Remember me?  I wouldn’t hold it against you if you didn’t.  I’ve had a lot of gaps where I said “This time I’ll really be much more active on my blog!” and then completely wasn’t, but this has been a long absence even for me.

For one, I’m back in America.  My time in China finished just over a month ago, though in many ways it feels as if I just stepped off the plane several days ago.  I only spent a year there, but it felt like much longer, and it was surprisingly hard to say goodbye.  My time in China, especially the time at the end of my stay, and my return to the US would be enough content to fill ten subsequent rambling blog posts, but I have other things to talk about, so if it waited this long it can wait a little longer.

Why Am I Dead: Rebirth

For another, I’ve gone and released a game “Why Am I Dead: Rebirth”, a remake to the original.  If it seems like this came out of nowhere, that’s because it absolutely did.  I didn’t mention it anywhere once…just sort of silently slipped it online one night.  It’s a pretty comprehensive update, I hope; all of the art has been completely redone with more time and experience put into it, and the dialogue/story has been edited or added to substantially.  Lastly, the game is running on the source code of “Why Am I Dead At Sea”, which means the characters can have AI, the environment is more interactable, there’s more support for scripting, and things tend to be a bit smoother.

If you haven’t seen it yet, you can play it on Newgrounds here.

Why did I remake the original game?  I don’t think I’ve ever seen a free flash game being remade, unless there is some direct profit involved.  Well make no mistake, I am making zero money off of Rebirth.  I didn’t even bother to put in any ads.  So…why?  The simplest answer is I wanted a break from creating the sequel, but I was afraid of any side-project running away and consuming all of my attention.  This was a side-project I knew I could finish, and, well, I knew I would eventually get bored of.

You know what I really love?  Before/after comparisons.  So here are some images from the original game and remake paired up to show you the difference in visuals.  To be honest, updating the visuals was by far the most gratifying part of this project.

First up, the character designs.  On the top are the originals, and the bottom has their updated versions.  Though the differences might seem subtle at first glance I feel like the remakes are miles ahead in terms of readability and aesthetics.

Here are the full sprite-sheets for every character in each game side by side.  They get automatically resized, so I just put up the thumbnails; you’ll have to click on them to get the full thing.  The style of animation has been updated to that of “Why Am I Dead At Sea”, which means essentially double the smoothness.

The last thing I’ll show is two screenshots of the same place in each game.  Note the updated dialogue UI, the inclusion of shadows, and the tweaked environment.  The floor is darker and simpler, making it easier on the eyes, and the walls use their color much more efficiently. 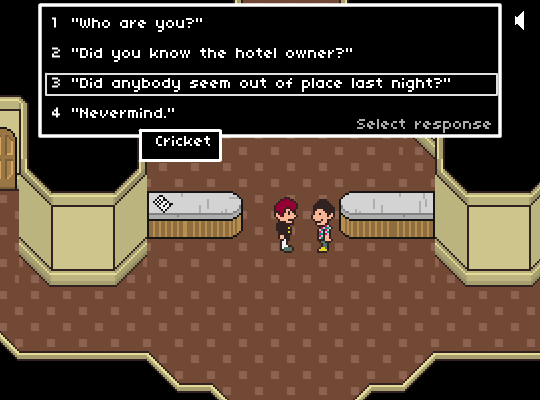 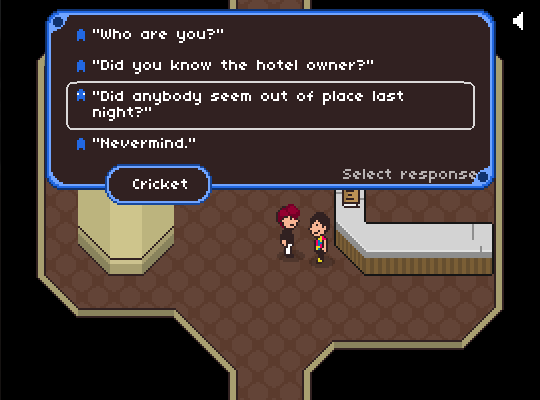 There were some aspects about the original game that I felt dissatisfied with, but left in because I felt changing they were too inextricable with the rest of the game.  The premise of the game and its basic structure is the same.  But I did make some alterations about how you actually progress, relying more on interacting with scenery at the right time instead of what I thought were non-intuitive and somewhat repetitive interactions with characters.  Dialogue had to be rewritten for this, and so some characters have different conversations and relationships.

One clear example (spoilers!) is that in the original, Randy opens up to Cricket and spills the beans about his whole past.  For this, you have to possess Randy and use him to confess to Cricket.  Doing this possessed as Randy doesn’t seem right, since as the player your dialogue choices should be inquisitive in nature, getting information out of the person you’re talking to; not the reverse.  In the new game, you possess Cricket and find some letters which you can then use to pressure Randy into opening up.  This fits the design of the game better, as you are always the one asking questions, which the game then answers.  But notably, it has the side-effect of changing Randy and Cricket’s relationship.  Instead of Randy trusting Cricket and confiding in him, Cricket simply squeezes the truth out of Randy.

There are a couple other changes like this, but even bigger than the things I changed are the things that I added.  I won’t go into a lot of detail about the new stuff, since that’s supposed to be found out by playing – but I think it’s fair to at least say how many endings the game has now.  The original “Why Am I Dead” had only one ending, but I hastily added a second one after putting it online.  “Rebirth” adds yet two more, creating a total of four endings.

The new endings add context behind the initial mystery and answer some questions that were brought up in the original game.  I’m not sure they live up to my own expectations, but hopefully if you’re the kind of person who worked hard enough to see the endings, you’ll be the kind of person to appreciate the new context.  And just to be clear, the things brought up in the new endings were what I had in mind when I made the original two years ago – I didn’t just come up with them on the spot!  So it is really canonical to the first game.

This game was sort of rushed out of the gate, and there’s still work to do on it.  Yes, sadly, by that I mean there are some pretty scary bugs…though I will say it’s way better than the original was on its release!  In addition I didn’t add any API support for Newgrounds, so there’s no medals or even tracking on the game.

But I released it when I did so that I could cross-promote in the game.  Cross-promote what, exactly?  Why, none other than my Steam Greenlight page for the upcoming sequel!  That’s right, “Why Am I Dead At Sea” now has its own Greenlight page, which I highly recommend you go to right now and vote “Yes” on!

In truth, I could have waited on both “Rebirth” and the Greenlight page, since I’ve been busy traveling recently and wasn’t able to capitalize on either.  I should have contacted press and various websites about both developments when the iron was hot, but I’m only catching up on that now.  So really…bad timing, I guess.  But it’s up and getting eyeballs, so I guess that’s a good thing!

This post is already really quite long, so I think I’ll leave a more detailed look at the Greenlight and any developments on the sequel for my next post.  Which I promise will be much more prompt than this one was!